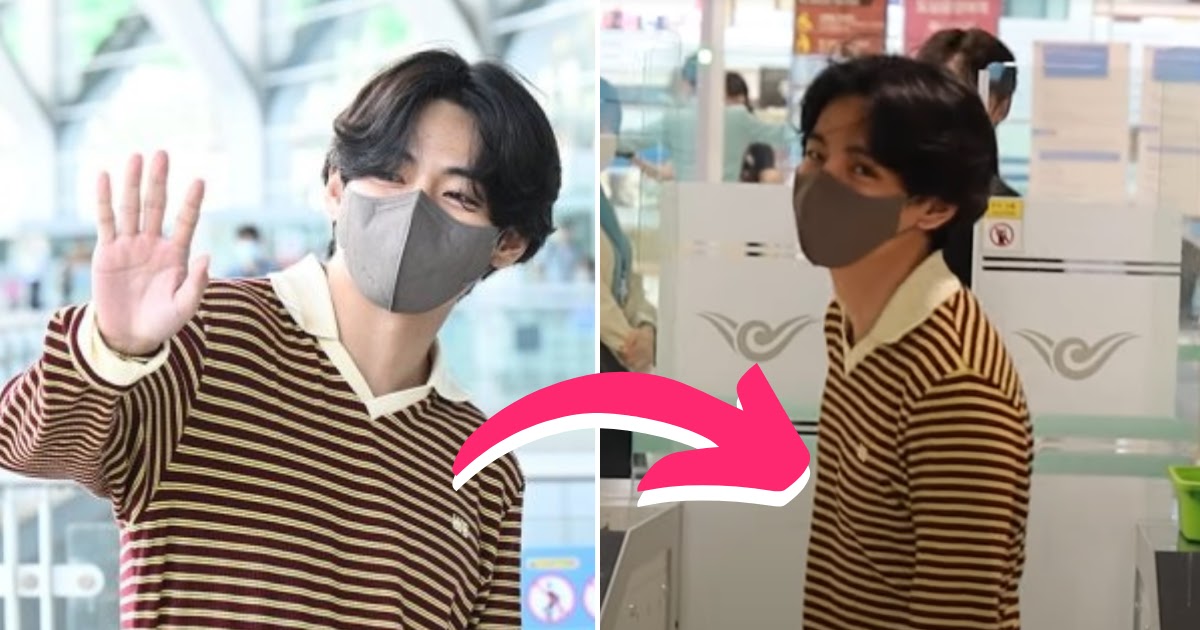 Whenever it comes to an idol showcasing their true personality in the best way, BTS‘s V is always praised for his behavior towards those around him. In particular, the idol has always managed to go viral whenever he chooses to leave the country, which always involves a trip to Incheon Airport.

It was no different when V arrived at Incheon Airport on August 24 to leave for a personal schedule in America.

Netizens couldn’t get over V’s unique look when traveling as the idol paired a striped top with some brown pants, giving off major fashionista vibes.

Of course, alongside his dazzling visuals, V once again gained attention for his interactions with those waiting for him at the airport.

As soon as he stepped out of the car, reporters couldn’t stop taking pictures of the idol. V maintained his composure as he started waving at those waiting outside.

Like every time V has a schedule, the media was shouting compliments at the idol. Even though it must be something V is used to, the idol got extremely shy hearing all of the compliments and had the cutest reaction while walking into the airport.

Throughout the videos taken by the press, the idol was praised for his unique fashion and for making Incheon Airport his own personal runway.

V continued greeting fans and the media, but he also had this special presence about him that exuded energy and felt like he was walking a catwalk. All the reporters were truly whipped by V, with some fanboying throughout, shouting “Taeyang-ssi,” and “Oh my.”

Even as he was ready to get checked in and enjoy some time at the airport before his flight, the idol continued to showcase his visuals and exceptional manners.

Yet, one moment stood out the most and made netizens LOL. Before leaving the media, one of the reporters started waving at V in a cute way. Of course, V had the best reaction as he cutely imitated the reporter’s unique way of waving.

It isn’t the first time that V’s interactions with reporters have gone viral. In the past, it seems that the media have truly cemented their ARMY status, as they always wish him well and share their love for the idol.

V also went viral when a female member of the press almost bumped into a pillar at the airport. Instead of ignoring it, V ensured that she was okay to make sure that she wasn’t hurt.

You can read more about V’s interactions with reporters at the airport below.