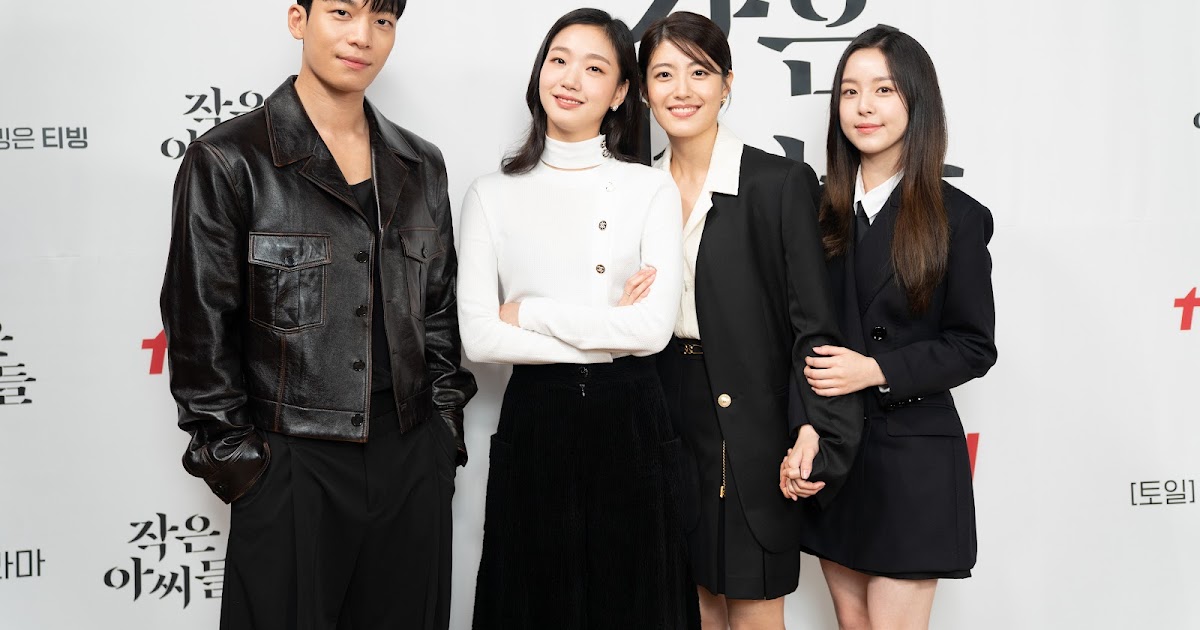 Starring Kim Go-eun, Wi Ha-jun, Nam Ji-hyun and Park Ji Hu, the 12-episodes ‘Little Women’ tells the story of three sisters who grow up poor and rely on each other to later stand up to the wealthiest and most powerful family in Korea. It is on how the three sisters navigate the meaning of money in their lives, told through a spectacular mise-en-scene.

Earlier today, director Kim Hee Won and the main cast Kim Go-eun, Wi Ha-jun, Nam Ji-hyun and Park Ji Hu attended the press conference of ‘Little Women’ and talked about their characters in the series. “We have very good vibe during filming and I believe it helped in leading their good chemistry,” said director Kim Hee Won.

The sisterhood of Kim Go Eun, Nam Ji-hyun and Park Ji Hu is another aspect to look forward to in Little Women. All of them have established themselves and captivated fans through their past works – viewers are eager to see what they have to offer next. Director Kim Hee Won added “3 of them are really like sisters, they complete the perfect ensemble.” “Their synergy makes me smile. Kim Go Eun is the cheerful firstborn, Nam Ji-hyun is the dependable middle child, and Park Ji Hu is the smart youngest child. They lift each other up, support each other, and act like actual sisters. They are all kind and talented, so they have utmost respect for each other and create such.”

Kim Go Eun portrays the eldest sister Oh Injoo, who wants to protect her family with money. She grew up in unforgiving poverty, and was too young when she learned the power of money and how it could protect her family. Her only wish was to live just as anyone else. Her entire life is uprooted when unexpected events unfold before her eyes.

On Oh Injoo, Kim Go Eun explains, “she lives her life trying to love others and express her feelings in her own way, and does her best in everything she does. I think that’s what drives her to live and exist.”
“Oh Injoo is transparent, like a crystal ball. I thought a lot about how to portray this character, since she’s so complex and has many colors,” Kim Go Eun added, fueling anticipation for the character.

Nam Ji-hyun takes on the role of Oh Inkyung, the second sister who does not want to sell her soul out to money. She is a journalist who is driven by the need to “do the right thing” with a sense of mission and empathy. Though she’s been poor her whole life, she never follows when money calls. She has faith in her values, and is confronted with a mysterious case that she had to hastily shut down when she was just starting her career. With her expertise in character portrayal, Nam Ji-hyun is set to immerse herself in the passionate and rational character of Oh Inkyung.

“Persistent, passionate, calm, driving force” are the words that Nam Ji-hyun uses to describe Oh Inkyung. She said her character “is the most persistent, rational, passionate and unrelenting in getting what she wants” out of all of the characters she’s portrayed. In addition, she said “since Oh Inkyung has so many faces, I wanted to show the viewers those different sides depending on who she meets, and what she wants from those people. I think it will be entertaining for the viewers, too, to follow this flow.”

The youngest sister who is overwhelmed by her sisters’ love Oh Inhye is portrayed by the up-and-coming actress Park Ji Hu. Oh Inhye is an artistic genius who matriculates at a prestigious arts school with just her skills, despite her penniless situation. However, she gets a taste of a whole different world – other than the harsh one that she has always been faced with – and tries to leave the comfort zone of her sisters. Fans anticipate the depth and density with which Park Ji Hu will portray Oh Inhye, given her recognition for her past roles.

Park Ji Hu said that she took painting lessons to perfect her character Oh Inhye, who is an artistically inspired genius and someone who expresses her inner self through art. She added, “Oh Inhye is the youngest, but she is mature and realistic since she had to grow up young. This side of her sometimes hurts her sisters.” At the same time, she said that “Oh Inhye is thankful for her sisters’ sacrifice for her, and feels sorry. That’s why she tries to stand on her own feet. I tried to make this come to life more persuasively,” adding to the hype.
The production teams know that they can rely on these actresses, too.

Wi Hajun portrays Choi Do-il, a man who believes money is the most sacred thing on earth. As an elite consultant who flies back from London, he inadvertently works together with the poor admin worker Oh Injoo (starring Kim Go Eun) for 70 billion Korean won.

Asides, what added excitement to viewers in Singapore is that back in June and July, the cast and production crew of Little Women were spotted shooting at various locations in Singapore, sparking much interest. You can spot familiar landmarks such as Marina Bay Sands and ArtScience Museum from the trailer.

The trailer for Little Women opened up with a warm and sweet scene with 3 sisters celebrating a birthday, with a sudden, alarming turn of the story involving mega-scale schemes for finding 70 billion won’s worth of a slush fund. This mystery drama is packed with hard-hitting twists-it’s not what you would expect for its title and what we would typically associate with it.

Can’t wait to see their synergy and chemistry in ‘Little Women’ – airing on Netflix 3 September.